3 Common Money Excuses We Tell Ourselves 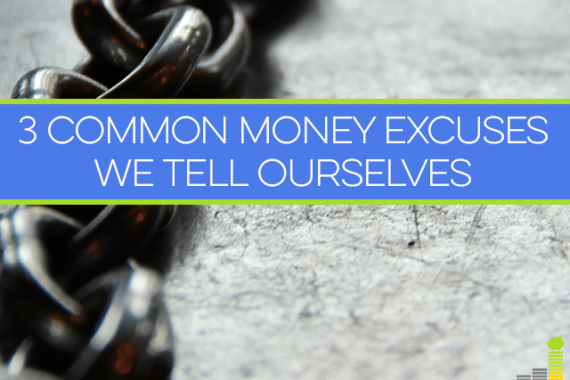 Money excuses are a part of everyday life. We’re all guilty of spending a little too much here or there or thinking we have more in our accounts than we actually do.

Looking back at all the money excuses I made back in my early 20’s makes me laugh. “Everyone takes out student loans” is the first one that comes to mind. That definitely wasn’t true!

So, in honor of the fact that we’ve all told ourselves a money excuse or two, below are some common ones that I know I’ve told myself at times and which, if we’re honest, we might be telling ourselves right now to justify unhealthy financial habits.

1. I deserve to spend this because I’m awesome.

I mean, we all are at some point, right? The problem is channeling this excitement into a trip to the mall. When great things happen to us, it’s part of the American culture to want a reward. Rather than thinking of a reward in the form of a getaway or new purse, though, remember that doing well in life and saving your money is a reward in itself.

2. I’ll charge it and pay it before the bill is due.

The new iPhone isn’t that much, right? (Okay if you have it, I don’t want to know because I’m already jealous.) It’s pretty hard to see new, shiny things and conjure up some self-control. However, one big lie people tell themselves to get into credit card debt is that they’ll pay it off before the bill is due, even though they don’t know where the money is going to come from to make good on that promise.

Unfortunately, this line of thinking becomes a habit and before you know it, you’ve charged several things to your card, promising yourself you’ll pay it right when you get that paycheck.

One way to combat this is to stay organized with a budget, so you don’t over-allocate your money to numerous different things before you have it.

3. Everyone else is spending, so I should too.

Peer pressure doesn’t go away in high school,. At least in my experience, it definitely continues throughout adult life.

I can think of numerous times I’ve gone out with friends and not wanted to buy a drink at a restaurant. It feels awkward when you’re the only one not doing it though so I usually give in. I just can’t justify $7 for a glass of wine when I can buy a whole bottle for that at the grocery store, but I tell myself everyone else is spending it so I should too.

A great way to avoid this is by spending time with people who share your values – and by values I mean they also enjoy drinking bottles of wine that are $7 and not just glasses of it. 😉

Ultimately, money excuses are going to come up from time to time. It’s a pretty normal thing that happens to everyone, so you shouldn’t beat yourself up too much if you’re guilty of the same thing. I know what it’s like to convince yourself to buy the more expensive option thinking it’s more valuable or telling yourself you deserve a vacation. What’s most important is to be aware of the tendency so that you can combat it the next time it comes up.

What’s a money excuse you tend to tell yourself? How do you like to celebrate accomplishments? What helps you avoid overspending?

Additional resource: If you’re looking for a simple way to stay on top of all your finances, then check out my favorite new tool – Personal Capital. Completely free, it allows you to track your spending, monitor your bank and investment accounts and watch your net worth plus many other tools.