Is a College Degree Worth it?

Posted on October 24, 2012 by John Schmoll in College/Student Loans 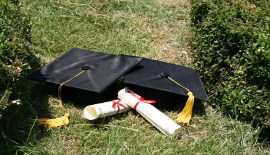 I read an article recently on Yahoo Finance that discussed a new study related to getting a college degree and the subsequent student loan debt that can come with it. As a side note, if you don’t read Yahoo Finance, then I highly recommend it as it has a wealth of information. The study showed staggering news for recent graduates and the perils they face in attaining their college degrees.

Like many of my friends, as I was growing up, my parents made it clear that I was expected to get a college degree. They thought, as many did then and still do, that a college degree paves the path to achieving success in our society. Unfortunately, unless you land a killer scholarship or have no means, college degrees aren’t free and can possibly set you up for failure in your life in the real world. To be clear, I am not wanting to debate the issues of government subsidization of higher education, but rather, to consider the high cost of a college degree and what that means for those involved.

How Much Student Loan Debt is Too Much?

Speaking from experience, debt in any form or fashion can take years to pay off. Student loan debt is no different. What I found staggering in this study was that students graduating with a college degree in 2011 were averaging nearly $27,000 in student loan debt. That is a crazy amount of debt! Sure, if you’re going into something specialized like medicine, science or engineering that number might be easier to pay back, but many do not go into one of those fields. The study also points out that the current economic climate is making it difficult to find quality work. Those with a college degree are faring better than the rest of the nation, but not by much.

A good way to avoid potentially massive student loan debt payments is to go to school online. Going to school online is the best option for anyone on a budget, as any bills that would’ve been associated with room and board are no longer an issue. Even if you went to a conventional university but didn’t choose to live on campus, this method of school still saves you money that would’ve otherwise been spent on gas.

There are Jobs Available for Those Without a College Degree

Debt 101 Should be a Required Course for any College Degree

I remember graduating from college and feeling like I could conquer the world, then came the grim truth of having nearly $18,000 in student loan debt. Which as it so happens took me nearly 10 years to repay. While I needed loans to get my college degree, there was not one class, not one lesson about debt or how to manage it. Sure, if I would have been getting a degree in business or finance I would’ve learned about things like that, but my degree was in History.

The question I want to pose is this: are we really preparing students for life by not teaching them about debt while they’re in college?

I would argue that we’re not. Sure, they have that nice college degree to hang on their wall, but is it worth it? Some might think that I can declare bankruptcy and get them wiped out…Wrong! Maybe if I die then my loved ones won’t have to pay them back…Wrong! Maybe if I can’t pay them then my loans won’t be sent to collections…Wrong Again! The point I am trying to make is that as a young person is looking at their future and whether or not it holds a college degree, be frank about the cost. It is likely that a college degree will be best for them, but for some it is not…and that is ok. There are plenty of jobs out there for those that are willing to work hard and master a skill. And if they do go after a college degree let them do so with their eyes open to the importance of student loan debt and doing their best to minimize it.

What are your thoughts? Are you surprised that someone who graduates with a college degree should expect to have $27,000 in student loan debt?

Photo courtesy of: A B