Posted on September 9, 2015 by Cat in College/Student Loans 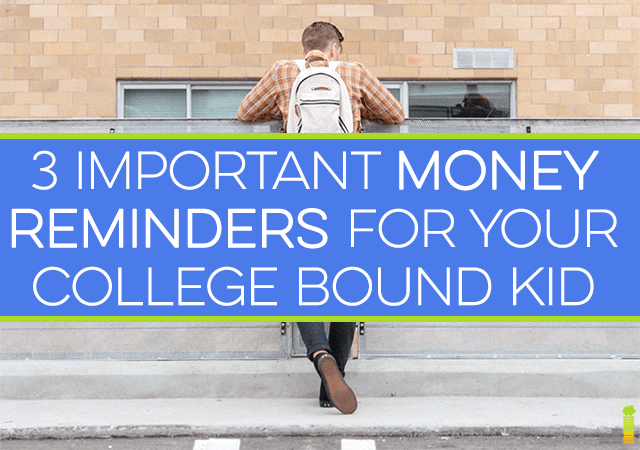 A recent national survey showed that 70% of college students feel stressed about money. Whether it’s because of their student loans, credit card debt, or inability to pay their bills on time, college is really the first time that many young people have to handle at least a portion of their financial lives on their own.

Because of this, it’s more important than ever to talk to your college bound kids about money. If you’ve never discussed saving, budgeting, or investing before, now is the time to have a nice sit down and play catch up on all the financial lessons they need to know for school. Here are a few examples:

1. Fight the Desire to Get a Credit Card

Credit card companies are not supposed to aggressively market to students under the age of 21 thanks to the CARD Act, and yet college campuses are still filled with credit card companies trying to gain new customers. So, it’s important to remind your children that credit card debt can seem never ending and it adds up more quickly than they might think.

In 2013, the average college student had a $499 balance on their credit card, which is a lot for someone so young who might only have a part-time minimum wage job. It’s not really the average balance that is worrisome, though. Rather, it’s the lack of mature decision making when it comes to finances and the lack of knowledge about how much carrying a balance will truly cost them in the long run. That’s also not to mention the fact that you don’t need to carry a balance to establish credit. 🙂

Tracking your spending is one of the hardest habits to start and stick to. Even I, a full-time personal finance blogger, go in waves when it comes to tracking my spending. Some months I track my spending to the penny and other months I get too busy to do anything other than check my balances and make sure nothing looks awry.

Still, it’s a worthwhile goal to encourage college students to learn this skill and practice it. Many people who are full fledged adults don’t realize how much they spend on eating out per year and what it would mean for their overall savings if they watched their spending a little more closely.

Whether you give them a new notebook and a pen for the process or set them up with an app like Mint or Personal Capital, help them practice this skill before leaving for college and follow up with them regularly to see how they are progressing.

College students have their own brand of Joneses, and your children will likely be exposed to many different types of people at college, possibly far more diverse than the people they encountered in their hometowns.

For example, some college students will be from extremely wealthy families. They might drive cars nicer than you ever will and have money to burn. Your children will have to learn that life is a marathon, not a sprint. They shouldn’t try to keep up with people on campus who might have a large trust fund when they don’t. It’s hard in theory because our society is programmed to think that buying things equal happiness. However, remind them that they are learning financial skills for the future so that one day they may be financially independent on their own and able to afford what they want when they want it. 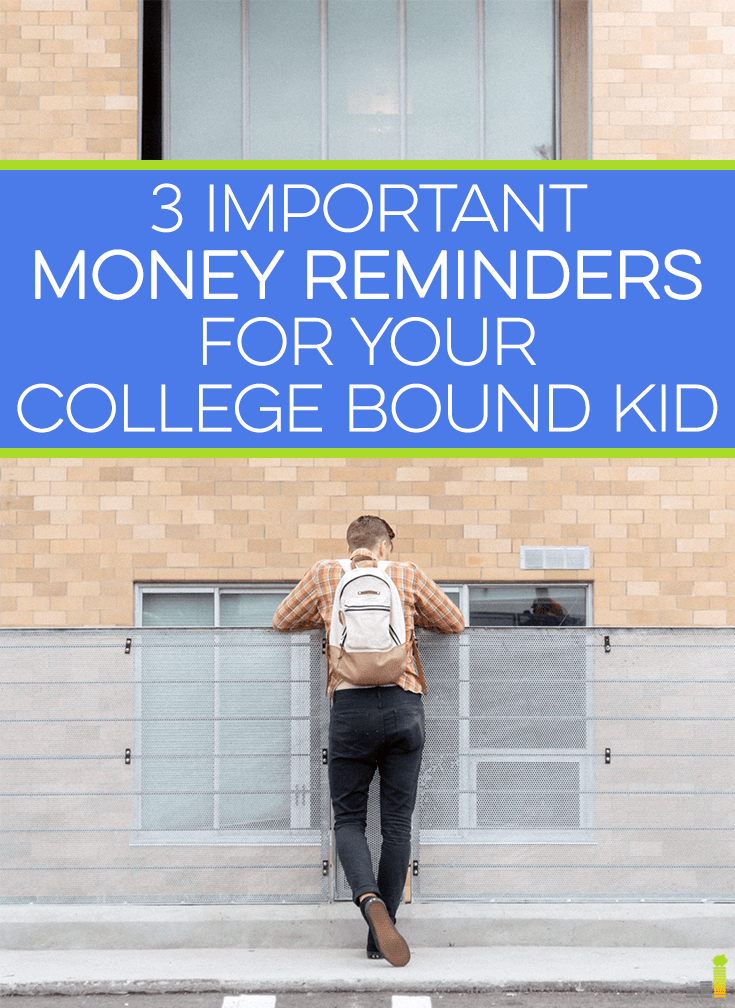 Ultimately, when it comes to your college bound kid, the most important thing you can encourage them to do is to have fun and be kind to everyone they encounter. Teach them to try not to read too much into the images people project. For all they know, the girls on campus with the $1,500 purses might have ten maxed out credit cards – a problem your kid definitely doesn’t need.

Most of all, just remind them that when they focus on being smart about their money decisions, live within their means, and stay true to themselves, they can learn valuable financial skills that last a lifetime and become one of the very few college students who graduate with a firm grasp on their personal finances.

What are some money lessons you wish you would have known when you started college? When do you think someone should get their first credit card? What are some other financial lessons you think are important for college bound students to learn?