What My Cheap Food Was Costing Me

Cheap food might taste good, but over the long term it can have bad ramifications. I share what my dietary choices were causing to happen in my life. 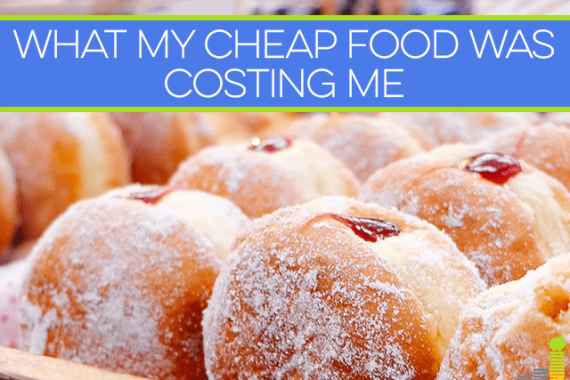 Home » Uncategorized » What My Cheap Food Was Costing Me

1,060 calories. That’s the number of calories in the standard McDonald’s Quarter Pounder With Cheese Value Meal. If you want to go “large” then you’ll need to add another 250 calories to that bad boy of a meal.

That, my friends, was my exact train of thought just over a year ago. In fact, I held to that thinking for most of my life. It wasn’t until last year when I started getting serious about losing weight that I began to see the real and true impact on my health those decisions were having.

These Daily Decisions Were Costing Me My Life

To give you some perspective, the meal listed above is 70 to 82 percent of my daily caloric intake now. Prior to completely changing my lifestyle habits about a year ago, I was eating fast food, on average, once a week – on a “good” weak. That might seem bad, good or somewhere in the middle depending on your opinion on fast food. That aside, it reveals how I viewed eating. I was consuming in the neighborhood of at least 3,000 calories per day if not closer to 4,000 or more.

I was busy, or so I told myself, and would grab quick, “cheap” and easy things to eat. They had the added benefit of tasting good and gave me, or so I thought, the quick boost of energy I needed to carry me through the day.

Looking back now that I’ve lost 92 pounds (as of about a week or so ago) I can see how those snap decisions were costing me my very life. I may not have had a gun to my head, but the Quarter Pounder was doing the same thing, albeit at a slower pace.

I know that might sound alarmist, but trust me when I say it’s not. I was near 40, had little energy throughout the day and would tire easily. That was all because of the fat I was packing on myself.

To make matters worse, I was leading my family in the very same decisions. The little Frugal Rules’, incredibly impressionable that they are due to their age, were being ushered into a life where fast and cheap food was commonplace. I was also leading Mrs. Frugal Rules down the same path. Point being, I was modeling it for them, meaning it didn’t just stop with my own personal health. In the end, I lost 100 pounds on Nutrisystem. You can read more about how I did that in my Nutrisystem review.

How Can This Tied Back to Finances?

I know this may seem like it has absolutely nothing to do with personal finance. Well, it’s my site, so I get to say it does. 😉 Seriously though, there are a variety of ways our food choices tie back to finances.

The obvious way food choices tie back to finances is health care costs. According to The Fiscal Times, health care costs related to obesity here in the States could end up adding up to $605 billion in direct, indirect and intangible costs to the system – per year. That is a staggering number to say the least.

With the health care system as messed up as it is the last thing we need to do is add more costs to it. If we continue down the current trajectory we’re on I can only imagine what those costs will add up to in 5-10 years. It won’t be pretty.

The other way it ties back to finances is if you’re in the habit of making poor choices in relation to food, I would argue that it’s more likely you’re doing the same when it comes to finances. This is not meant to judge, fat shame or anything else like that as I have been in the same position myself and we make those kind of decisions every day. For example, if you’re in the habit of wasting $5,000 throughout the year on needless items I would argue that money would serve you much better, assuming you’re not already doing so, in an IRA or paying off debt as opposed to buying more stuff.

Looking back, before I started my weight loss journey I didn’t think I could change. I thought that I had been living this way for so long that I couldn’t change. Thankfully, that was a lie that proved to be wrong. Going back to the Quarter Pound meal, I now use those calories on things that bring me value in the day.

This is not to say that I don’t have the same temptations as I did a little over a year ago, because I very much do. The difference is that now I view eating like managing my money – with a budget. That impacts my daily choices all with an eye to the kind of lifestyle I want to live now and in the future which allows me the freedom to choose the kind of life I want as opposed to one saddled with poor health.

What other financial issues do you think could be tied back to our health choices? How often do you eat fast food? What’s one challenge you deal with in relation to food choices?