Car Title Loans: Why it’s Foolish to Sacrifice Your Car

Car title loans seem like a great way to get quick money. They’re not. Here are alternatives to auto title loans that will help much more. 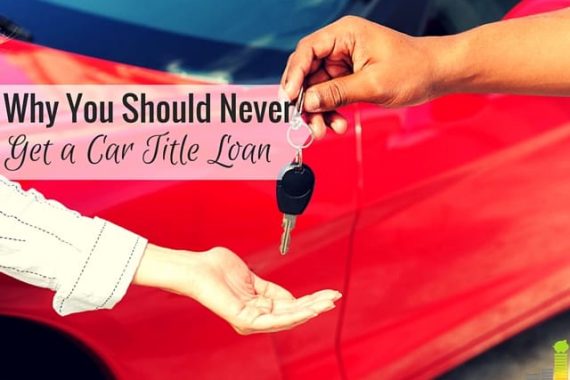 Before I began to pay off my debt, I did many things to get by. I would pawn items. I would sell plasma. I would drastically cut my grocery spending to subsistence level. I was like a junky, looking for a quick hit until the next payday. Many in that same situation turn to payday loans. We all know how bad those can be though there is something far worse – car title loans.

I know it seems impossible for something to be worse than a payday loan. Don’t get me wrong; they’re horrid at best. However, auto title loans can have more of a negative impact on your overall livelihood.

What is a Car Title Loan?

A car title loan works very simply. You have limited funds and you need access to cash. You don’t want to wait around to get the cash. You need money today and have few options.

You have very few things to pawn, or are at least unwilling to part with and begin to look for items of value you can use as collateral. You don’t need the money for anything long-term – you just need it to get by.

Akin to my personal junky analogy above, auto title loans allow people to get access to quick cash in very little time – usually in under an hour. We’re not talking massive sums of money, as Pew Charitable Trust reports, the average car title loan is $1,000, but what’s missed is one very important issue – you sacrifice your car to get the money.

Even though I work from home, I can still imagine what it would be like to sacrifice my car for quick money and I can tell you this – it would be bad.

Why Are Car Title Loans so Bad?

Car title loans are dangerous for one simple fact – you risk having your car repossessed if you miss a payment. Truth be told, I’m not certain why an auto title lender would want to repossess a car as they’d be giving up sizable payments but it does happen. Pew reports that upwards of 11 percent of borrowers have their cars repossessed each year.

Think about that for a moment. In a time of desperation, you take out a car title loan and miss several payments. The lender repossesses your car leaving you with no means of transportation.

That impacts your livelihood folks. Unless you have access quality public transportation or can buy a new car, which is probably unlikely, you have no way to get to work.

Take the example of William Sherod. NBC reports that Mr. Sherod took out a $1,000 car title loan in 2014. He was short on a payment by $26. The lender repossessed his car over $26. He had to borrow over $800 from a family member just to get his car back.

The lifestyle impact aside, here’s why car title loans are so bad from a numbers perspective:

Pew reports other scary statistics but these provide a good overview. The rate alone should be enough to scare people away. The crazy, although I guess not too crazy truth is that when I was searching for car title lenders, I discovered that very few sites publish their rates. They operate in the shadows to lure unsuspecting individuals with the promise of quick cash with very little strings attached – though that is indeed not the case.

Alternatives to an Auto Title Loan

The only real alternative to car title loans is reform. Pew reports they’re legal in 25 states and a few, like New York, have imposed significant caps though nothing standardized has come down the pike. My hope is that will change in time.

*Related: Have a check you need to cash? Here’s our guide on the best places to cash a paper check near me to get money now.*

Aside from reform the alternative largely boils down to a behavioral issue in my opinion (assuming there isn’t a true, genuine need for money.) Beyond that the issue comes down to managing your finances from month to month. That’s evident in the fact that half of people who take out auto title loans do so to pay regular monthly bills.

Ultimately, nearly anything is going to be better than taking out a car title loan. You may feel like you have no option, but I don’t believe that to be the case. There are many options out there, if you’re willing to change the underlying behavior, and look for them. Just think of it this way – risking your car and potentially losing out on that bet will put you in a far worse situation.

Why do you think many don’t think of the repercussions of taking out a car title loan? What other options would you recommend? Could you get to work without a car?