Should You Buy Your Kid a Car?

Buying your kid a car can be tricky as you don't want to spoil them. Here are tips to use the situation to teach financial literacy and responsibility. 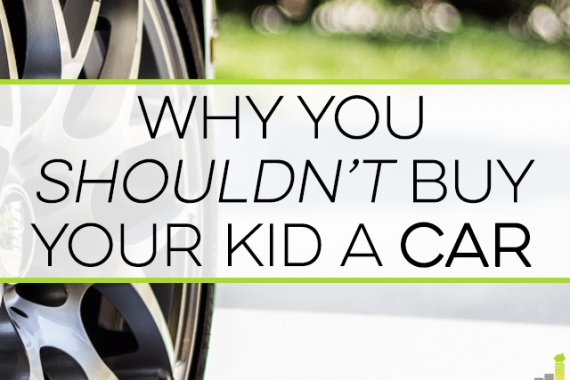 Home » Attack Debt » Should You Buy Your Kid a Car?

I’ve listened to many people over the years brag about what they’ve purchased, but this story really takes the cake. I sat across from an old co-worker as he told me a story that he was clearly proud of. With a satisfied grin on his face, he told me how he had just bribed his teenage son with a brand new, $30,000+ 3-series BMW so that he would break up with his girlfriend that the father didn’t like. That weekend, the son broke up with his girlfriend and got the car from his dad.

So, being a woman who likes to live frugally, what did I say to this guy?

Nothing. Absolutely nothing. I had no words, because I’m not sure there’s much you can say to someone like that. I sat there with glazed eyes and a dumbfounded smile plastered on my face as I listened to his story. I think I may have even nodded along at certain points, as though to commiserate and imply, “Kids these days. So hard to raise them!” In my head, though, alarm bells were going off and my jaw was on the floor.

I’m not typically one to judge anyone’s style of parenting nor am I one to judge someone for how they spend their money, but I really couldn’t help myself that day. I completely judged the guy. I couldn’t believe that anyone would do that. My mind was blown and, years later, that story has stuck with me. I can’t help but wonder what kind of person his son is today.

Although that is (hopefully) a highly unique story, it made me wonder what that kind of entitlement will do to a teenager as they grow up. Is it good for them? Does it teach them any character? Should we even buy our child a car at all or will it just set high expectations and make them spoiled?

Teaching Your Kid To Keep Up With the Joneses

I’m not yet raising a teenager and dealing with everything that goes along with that, so I can’t speak through that lens. However, I have been a teenager before, and I vividly remember the emotions that go through a teenage head.

*Related: Need to buy your child a cell phone? Read our guide on the best phone plans for kids that won’t break the budget.*

If we buy our kids brand new luxury vehicles from the time they are teenagers, we are setting them up for a lifetime of keeping up with the Joneses syndrome, and I think it’s safe to say that most of us don’t want that for our kids. By setting up high expectations and forking it over to them because they feel entitled to it, they won’t have a good grasp on how to become financially savvy adults.

As parents, we have a responsibility to teach them how to handle money well, and to start them off with a few financial lessons.

Give Your Kid Some Character

If you do want to buy your child a reliable car, I can’t blame you for that. My parents did it for me, and I will likely do that for my own daughter one day. If that’s your choice, too, then choose to make it a humbling experience. There are several ways to do that.

*Related: Need to save money on tires? Check out our guide on best places to buy tires and save big money.*

For instance, the car that my parents gave me was my mom’s old first generation Chevy Lumina. When they “upgraded” me a couple of years later, it was to my grandma’s old Chevy Corsica. Neither of these cars were lookers, but they got me where I needed to go.

They certainly didn’t match the coolness factor of the Mustangs cruising around my high school parking lot, but did I care? No. I was ecstatic and so thankful to simply have a car! I knew that my parents didn’t have to do that, and I was appreciative.

You can also make your child earn it and take the opportunity to teach them about budgeting and money. My nephew, for instance, just got his very first car. The agreement he had with his parents was that they would pay for half the car if he would pay for the other half. They didn’t want to just give him a car; they wanted him to work for it, too.

*Related: Not certain if you should buy or lease? Check out our leasing vs. buying a car guide to learn which is best for you.*

If you choose to purchase your child a car, you have a ripe opportunity in front of you. When you give your kids some incentive to help pay for a car or earn it in some way, they are going to step up to the responsibility. They are going to have a vested interest in caring for a car if they’ve helped earn it.

They are going to feel the repercussions and the pinch if they get a speeding ticket. Go ahead and take the opportunity to build some character and responsibility into the process by turning it into a money lesson that they can carry with them into adulthood.

Will you buy you child a car when it’s time? If you have you done that in the past, did you regret it? Did you parents buy you a car when you were a teenager?