When Being Frugal Embarrassed Me

Posted on November 20, 2013 by John Schmoll in Frugal Living 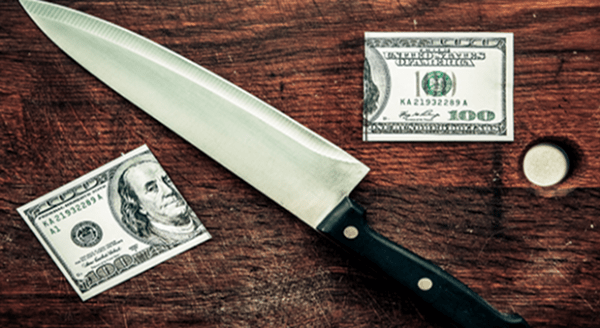 The following is a contribution from our friend Brian at Luke 1428.

My parents were masters at frugality. They inherited this mindset from their parents but circumstances also dictated their lifestyle. Raising two children on social worker and private school teacher salaries left little room for extravagancies. Every penny was important to save, every monthly budget vital to follow.

Two of their favorite pastimes were auctions and garage sales. To their fortune, the geographic location of my upbringing in southwest Ohio provided them weekly opportunities to engage in both. Most notably, the auctions drew supreme interest from my father.

Raised by Frugal Parents, I Often Found Myself at Auctions

Every Monday after dinner, he would conduct a hard target search for the weekly newspaper that had arrived earlier that afternoon. The classified section housed the auction listings for the week. He would keenly scan them, noting items that peaked his interest.

So it came as no surprise when he piled us into the car early one Saturday and we headed out of town to a giant estate auction. Little did I realize as we parked in the farm’s pasture how the events of that morning would become part of family lore. Nor did I foresee my role in one embarrassing frugal moment.

To appreciate my typical auction experience, you have to understand my father. He was very generous with his money and time but he loved to pick up items on the cheap. Rarely did my family shop at high-end stores or purchase items at full price. Instead we shopped the sales. Places like auctions, used car lots and Value City Department Store ruled the day.

He had honed another skill that made auctions attractive for him – the restoration and refinishing of wood furniture. He learned it from his father who spent hours creating masterpieces in his workshop.

So when we hit an auction site, my father wouldn’t go for the flashy antiques. He would pass by and look but never with any serious intent on purchasing them. He knew they would be overpriced as people feverishly outbid one another. Instead he would head out to the barns. In his mind, that’s where the real treasures could be found.

At a typical farm estate auction, people keep junk in the barns. Things they plan to sell but don’t want to bother moving out into the open. They know these items won’t bring much so it’s not worth the hassle to display them neatly. When it comes time to sell them, interested parties simply pile into the barn with the auctioneer and bid on the item wherever it sets.

This Saturday however, the auctioneer’s crew was carrying items from inside the barn out into the open. A good size crowd had begun to gather at the barn door’s opening. This was not good news for my dad because more people meant more bidders and a potentially higher price tag.

That day he had his eyes on a special “piece of junk.” My jaw dropped as they hauled it out of the barn…the most hideous cabinet I had ever seen. My eyes were fixated on its grotesqueness. 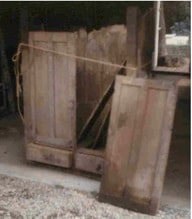 The base of the cabinet and a portion of one side were completely rotted, making it impossible for the cabinet to sit upright. They had to turn it upside down so it could rest on its top. The doors were falling off. The unit was so rickety they held it together with bailing twine.

I could see the wood was tarnished and stained. Years of exposure in the drafty barn had allowed mold and mildew to grow on the surface. To top it off, there was a mouse nest in one corner, with droppings scattered around.

Where Some See Junk, Others See Opportunity

My mother and I saw junk. My father saw opportunity. He possessed the ability to see beyond the imperfections. With his skills at refinishing and restoration, he had a vision of what this cabinet could become.

Positioning himself at the front of the gallery, he patiently waited, bidding number in hand. My mother, too embarrassed to be seen with him, went to hide at the back of the crowd and watch the proceedings from a distance. I stayed up front with my dad.

My young mind viewed the auction bidding process as a competition – a high stakes game of chicken where the weak stomached would flinch first. I loved it when my dad won. So as the bidding started, I was on pins and needles hoping for a victory, despite the ugliness of the prize.

I don’t remember the bidding for this item going on very long. Big surprise, I know. As my dad held the final bid when the auctioneer began the countdown, my anticipation of the win began to bubble.

I went completely nuts. I ran to the back of the crowd to find my mom, all the while pointing at dad and shouting wildly, “He won! He won! He won!” She tried to shush me but I had completely blown her cover. With the nearby patrons chuckling, she realized her attempt to distance herself from this hideous item had been foiled.

My last recollection of that moment was her shaking her head, turning, and walking away being totally embarrassed (I’ve never figured out if that gesture was directed at my father’s purchase or my antics.)

Several hours later the cabinet was laid out all over my father’s basement workshop. What transpired over the course of the next six weeks was a metamorphosis of epic proportions. My father transformed a $9 piece of junk into a beautiful cabinet that served as a storage compartment and microwave stand in our kitchen for the next several decades.

Years later, my father would refinish the piece again and combine it with a glass cabinet top – another auction find that required his refinishing touch. The unit now sits in our dining room, still providing value to my family. That’s a nice return on a $9 investment. 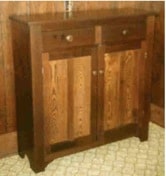 And well worth the embarrassment we…uh…my mother…went through the day of the initial purchase.

Have you ever been slightly embarrassed over a frugal purchase? What’s the best deal you have ever found at an auction or garage sale? How did your parents’ spending habits shape who you are today?

Author Bio: Brian Fourman is a private school teacher, personal finance blogger, side-hustling real estate investor and 2-time marathon finisher. In his down time, he loves being a dad to his 4 kids and husband to his just licensed CPA wife. You can check him out providing encouragement and inspiration on his blog at Luke1428.com.