Posted on March 30, 2015 by John Schmoll in Self Employment, Taking the Plunge 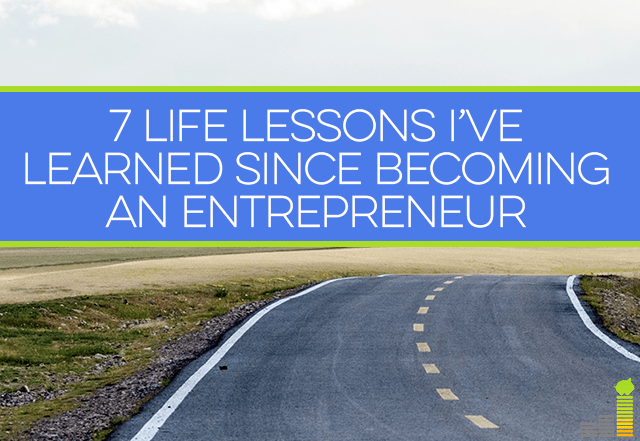 I have a confession to make. Ever since I can remember I have wanted to work for myself. I wanted to be an entrepreneur. I don’t know why that’s the case, but it’s something I’ve noticed for years.

The funny thing is, I never thought I had it in me to become an entrepreneur. In all honesty I think fear held me back.

Fear of the unknown.

Fear of it all blowing up in our faces.

Fear of what others might think of us taking the plunge.

I’m sure there were and are other fears, but that’s a topic for a different day. As I come upon three years of being an entrepreneur on my own and being a part of it with Mrs. Frugal Rules for a little over five years, I see one constant – there isn’t a day that goes by where I don’t learn something about working for myself or a life lesson in general.

With that in mind, I wanted to share some of the top life lessons I’ve learned since becoming an entrepreneur in the event it’s something you’re considering. If it’s not, then hopefully you can still get something out of it as it’s not all necessarily related to being an entrepreneur. 🙂

Opportunity is out there for the taking. Before I took the plunge into working for myself I knew the opportunity was out there, but had an admittedly academic view of it. Meaning, I was limited in my understanding of it.

Looking back, I now see how this held me and us back as a family. I thought that opportunity was only something special people got. Oh, how I was wrong. Yes, there is some luck involved in my opinion, but much of the opportunity is out there for the taking. Yes, it does take work and time to find it at times but it is most definitely out there to be had.

In my pre-entrepreneur life I see how this became a self-fulfilling prophecy far too many times. Today, I see opportunities as something to look for.

They’re something to fight for.

They’re something worth discovering.

They lead to more opportunities.

Even if you don’t work for yourself, I think this is something that can be applied to many areas of life. Instead of limiting yourself an “I can’t do that” mentality, think: “I wonder what X,Y or Z would look like if I tried it.”

Almost anyone can be an entrepreneur. The above lesson somewhat bleeds into this one. As I mentioned in the beginning I never thought I could be an entrepreneur. I thought there was some special skill I was missing, that I didn’t have the right personality, or that I couldn’t crack the special code.

Sadly, sarcastically speaking of course, I’ve discovered there’s no special decoder ring or anything like that you get in being an entrepreneur. It isn’t a special club. If I can do it then I know many others can too. That’s not to say you should start working for yourself, but that it can be done and can be done quite well.

If it’s something you want, don’t hold yourself back by the belief you can’t do it. I’m evidence of the fact that it can be done.

As much as I or anyone else for that matter, touts working for yourself, it’s just not for everyone.

People lie to your face.

You’re on the line for everything.

That can be an incredibly overwhelming burden to shoulder, especially when you have little ones to provide for. Mrs. Frugal Rules and I know exactly how overwhelming that can feel. There are days where I want to just hang it all up and shutter our business and get a “real” job in the traditional workforce. However, I quickly wake myself up with the realization that it is just not for me. While society glamorizes working for yourself, it’s most certainly not for everyone.

There are other things I’ve come to appreciate much more like traveling as a family. Money can be a funny thing with entrepreneurship – you rarely know where you’re next client is going to come from. If you’re like me that means wanting to take every job or do jobs that don’t pay you as much as you’d like.

Of course, you can only go so far doing that and thus why it’s so important to know your value. It means being open to firing a client if they’re not worth the hassle. It means realizing that you need to reclaim time for yourself as working for below what your worth is going to get you nowhere quick. I believe this can be applied to entrepreneurs and those in the traditional workforce. Know your value and be able to quantify it as that gives you power.

Embrace risk. Many would argue that being an entrepreneur involves risk and they’d be correct. There is risk involved. As I get, cough cough, older I see that risk is all around us. It’s what you do with that risk that helps or hinders you in my opinion.

You may not work for yourself, but risk is everywhere. Some of that risk, like investing in the stock market or asking for a raise, should be done wisely. Other risk, like telling your kids to go play in traffic is stupid risk and should be avoided at all costs.

Prior to taking the plunge myself I did all I could to avoid risk. I don’t know if I was fearful of it, but I definitely did what I could to avoid it. That has changed for me now. Admittedly, I still have a lot to learn when it comes to this but I’ve also come to realize that if I want to live a life of purpose and reach the goals we have as a family then I need to assess risk and welcome it when it means the possibility of taking us where we want.

Temptation doesn’t have to take you down. I’ll be honest here…the first year or so of our business there were times when I didn’t know what was going to happen financially. Fast forward a few years and we’ve had back-to-back record income years for us as a family with strong prospects of another similar year this year.

If that would’ve happened to us almost 15 years ago I’m quite certain of what would happen. We’d have spent all we could on different things, err crap, that we wanted. That’s not the case now.

Yes, we do allow ourselves a few simple pleasures as we put in a lot of hours but it’s all within our budget. We seek to enjoy today, without giving in to the belief that such a mentality equates to spending money like fiends. Rather, we enjoy life reasonably while focusing heartily on the future. That’s not to say that we haven’t been tempted at times, because we have, but realizing that temptation comes at the expense of our future helps keep us from making foolish decisions with our money.

Your temptation may be something else, or it very well could be financial in nature. The point is to act with prudence and to keep your eyes on the present AND the future – it can be done! 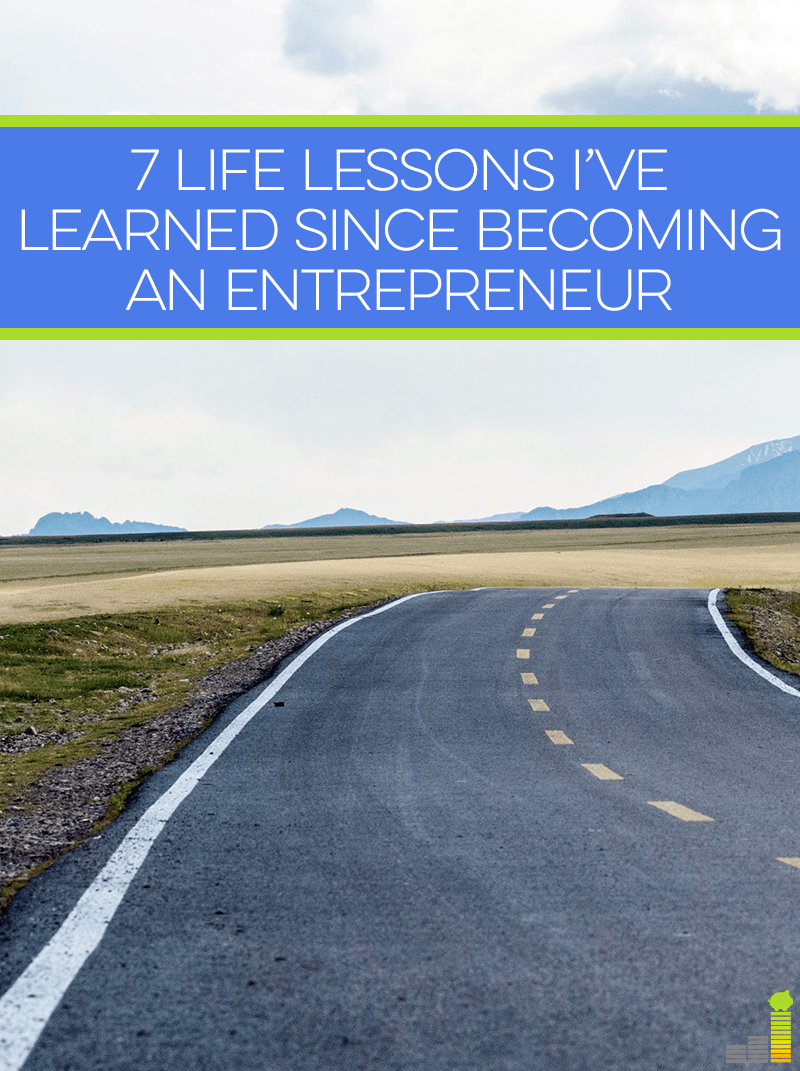 There is no one else I’d rather do it with. I saved this one for last on purpose. 🙂

I know it may sound cheesy.

I know it may sound sappy.

I know it may sound as not being possible.

But, it’s the truth, I couldn’t imagine going through this wild ride of being an entrepreneur with anyone other than Mrs. Frugal Rules. We get odd looks at times, but we seriously love working with each other. I know it’s not for everyone, but in our opinion we’re married so why wouldn’t we want to work together? Taken further, we’re both obviously different so our strengths and weaknesses play off each other so we’re that much more effective as a team.

In all honesty, Mrs. Frugal Rules is the backbone of the business. I don’t share this often with many, but she had left her a career as a copywriter after we had our third child. As a way to fill up a little free time (which I have no clue what that is anymore) and a way to bring in a little more income for the family she started freelance writing.

Some of you may remember them, but her first writing gig was through Demand Studios. Yes, that Demand Studios, who only paid $15 per post for the most random and inane posts before they got a huge slapdown by Google.

We were thankful for it at the time as it helped provide for our family, but the writing was soul-crushing. Long story short, it was needed as our first major client we assumed we’d get fell through. She wrote for Demand Studios for nearly ten months. I hated having to see her write the crap they had her writing and wanted it to be done for her. Coincidentally enough, the Google smackdown essentially resulted in her not being able to write for them anymore. That is the best thing that could’ve happened for us as a family.

Fast forward five years and we’re now doing marketing campaigns and strategy, plus considerably more, for companies all over the country, small businesses here in Omaha and several international businesses. Much of that all is because the gem my wife is and the backbone she is for our business.

Ok, enough cheese. 😉 I’m sure there are other life lessons I’ve learned over these past number of years. In fact, I know there are and this list only scratches the surface. The point is that life is full of learning opportunities and it’s what you do with them that matters in my opinion.

Do you want to or envision working for yourself? If you do now, what is one of the top life lessons you’ve learned as an entrepreneur? Why do you think society tends to glamorize being an entrepreneur?