Should We Become a One Car Family?

Becoming a one car family is not an easy decision to make. There are pros and cons to the situation. What have you done when faced with this decision? 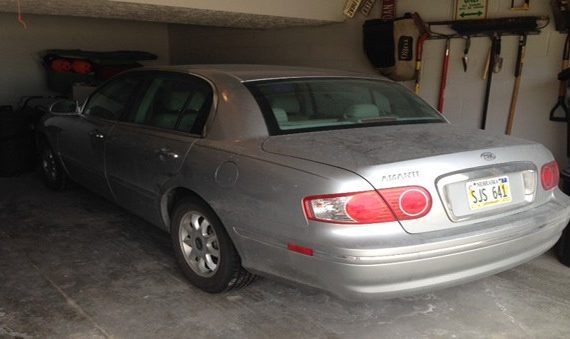 Home » Save Money » Should We Become a One Car Family?

As I shared several months ago, one of our goals for 2014 was to actively start saving again to buy a new to us car. The reasoning really doesn’t go back to a want, per se, but a need. Anyone with a family of growing kids can relate to our situation. Rarely does a trip out not result in a shiatsu massage for the driver thanks to our growing munchkins, their long legs and the lack of space in the back seat of our passenger vehicle.

As we look for ways to start building up our car fund, the question of whether or not we should become a one car family has been discussed numerous times and one that is worthy of discussion. We’ve been a one car family before, pre-kiddo days, and I was not a huge fan of it.This largely was because we worked at opposite ends of the city, which meant one of us, had to show up early to work and wait there at the end of the day as public transportation is really not an option in our fair city of Omaha. However, even though our commute is all of five seconds in the morning that does take away that as a problem.

The other major roadblock, in my opinion, is the car we’d be selling, the always sexy Kia Amanti you see above, was given to us by a family member (Hi Mom!) and could pose some intra-family problems.

Since Mrs. Frugal Rules and I are sort of at a roadblock in terms of if we should sell our second car and become a one car family I thought I’d ask for some input from you my dear readers to see what you think. 🙂

The Push Behind Selling our Car

The real reason why we started considering selling this car is that we really don’t use it much at all. By not much at all, I mean going months in between fill-ups kind of not at all. If and when we do buy a new car, the Amanti will be the car that’ll go as it is five years older than our Altima, has double the miles of the Altima and gets quite a bit lower gas mileage.

If those reasons aren’t enough, we simply are going to need a bigger car in the next several years. I shudder to think of becoming a minivan family, and will therefore likely go the route of some sort of used SUV, but we’re going to need to go bigger. That said, it only makes sense to keep the Altima as it is the newer car and we envision giving it to the oldest little Frugal Rule when she turns 16 for her first car.

The other major reason why we’re considering becoming a one car family is that whenever we buy this new to us car it’s going to take a nice chunk of change. It’ll likely take a couple of years to save up enough to pay cash for the car and that could be significantly reduced by selling the Amanti as it would likely get us about 20% or so of the amount of cash we’d likely need to save up.

Benefits to Becoming a One Car Family

Whenever we’re making a decision like this, I like to look at the benefits and drawbacks of making the decision. Becoming a one car family would benefit us in the following ways:

It would save us money: Duh! This is the obvious one. While we don’t spend much money on gas each month it would still likely be in the $10-20 per month range. The other major savings would be on car insurance. We have our coverage through USAA and already have pretty awesome rates. I don’t know how much exactly it would save us, but based on our coverage I’m thinking somewhere in the $20-30 per month neighborhood. So, we wouldn’t become millionaires by saving this kind of money, but we’re still looking at the neighborhood of $50 or so per month.

We get an instant boost to our car savings fund: I covered this earlier, but we’d likely get in the 20-25% range of what we’d need to buy a new car. The car is in excellent shape for its year and I am confident we could get fair market value from it.

It could meet someone else’s need: Like I’ve said, we don’t use it enough to warrant having a second car right now. While I’m a bit leery of becoming a one car family, I am sure there are others out there in need of a quality used car who we would be able to help.

Drawbacks to Becoming a One Car Family

I’m sure there are other benefits to becoming a one car family, but there are also some drawbacks. Here are a few of them:

We’re limited in what we can do: We don’t face this situation very regularly, but if we become a one car family what are we going to do if we both have in person meetings that overlap somehow? This would cause a problem, though we would just need to be flexible in our planning.

What if the Altima breaks down: This is likely the biggest drawback as we’d likely be forced to rent a car. It has always been very reliable for us, but the realist in me fears that it would of course break down a month after selling the Kia. The same issue arises when we’ll need to get the Altima serviced for any reason. I imagine we could always rent a car for the day, but it would be an added expense.

We’ll drive more as the kids get older: This really isn’t an issue right now, but I know this’ll change in the near future. Our two oldest currently just have swimming lessons they go to once per week, but I am planning on also starting our daughter in soccer in the summer. All that said, this means that we will be driving more often and thus the possibility of leaving one of us without a car becomes a reality.

Is the Short Term Benefit Worth the Cost?

The issue of becoming a one car family, as far as I see it, is whether or not the short-term benefit is worth the perceived inconvenience. We have done it before and know that we’re not alone as just over 30% of families would classify themselves as one car families, according to the Department of Energy, but is that an inconvenience that we’re going to be able to roll with? Becoming a one car family, temporarily at least, would allow us to get in to a needed bigger car sooner and allow us to save some money for the time being, but that would come at a short-term cost. As you can tell, I am in a bit of a quandary with this decision and could see us going either way right now.

What do you think? Should we sell our car and become a one car family for the unforeseeable future? How many cars are too many in your opinion?