Posted on October 8, 2015 by Erin M in Money Management, Saving 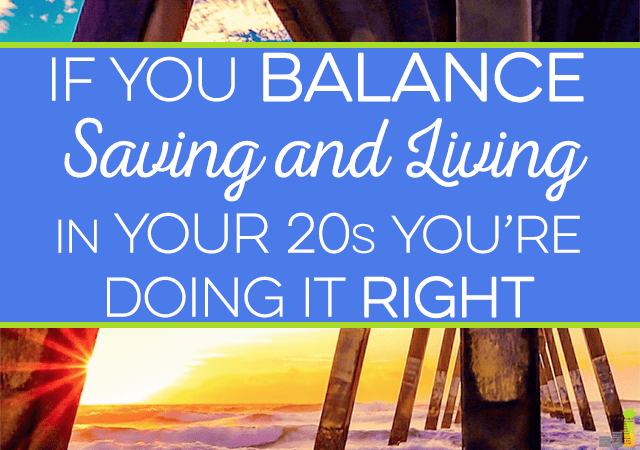 While both of these articles are great in their own right, I wanted to come at this from a different perspective.

For anyone who hasn’t read the piece, it argues young adults should give into the “YOLO” mentality so prevalent among us. We shouldn’t be consumed with saving and forget to live our lives.

As someone who has been slowly recovering from focusing on the numbers in my budget entirely too much, to the point where I was missing the big picture and forgetting to enjoy life, I get it. However, never has it crossed my mind to blow all the money I’ve worked so hard to save. Instead, I spend intentionally, which allows me to save while having fun.

It can be difficult to balance saving and living in your 20s, but it can be done. Let’s go through each point the author made, and I’ll give you my advice on how to take a less extreme approach to enjoying your 20s while still saving.

Everyone Needs a Safety Net

First point: Their need for us to have a safety net is just a giant metaphor for the difference between our parent’s generation and ours…We’re taking our time growing up, refusing to be shackled by mortgages and diapers. We’re not trying to live with safety nets; we’re trying to live on the edge.

Even if we’re becoming “adults” later on in life, this makes no sense. Anyone that has any liabilities needs a safety net. It’s always a wise idea to have some money saved up in the event something goes wrong.

What if you lose your job? Do you have a backup plan if you can’t afford rent, besides moving back home? Having savings allows you to continue living on your own while you find another job. This makes your situation less stressful and you can take your time to find a good fit rather than accepting the first offer that comes your way.

What if you want to quit your job because it’s not fulfilling and you want to switch to another career? With nothing saved it would be foolish. Instead, you continue slaving on in a cubicle.

What if you’re in a bad accident, and your health insurance doesn’t cover everything? The bills start to pile up. You have no savings, and you can’t afford to pay. Talk about stressful!

Having money saved gives you options, which leads to having more freedom. That’s my definition of living on the edge. If I had no savings, I’d be teetering on the edge of insanity because I wouldn’t be able to sleep at night.

All that being said, the amount you need to save depends on your situation. Most people in their 20s (if they don’t have a house or kids) can probably get away with something in the $1,000 to $3,000 range.

Saving for Retirement is Important

Second point: When you live your life around your retirement fund, you may as well retire now. You can’t make a mark on the world if you’re too cheap to live in it.

Most people don’t advocate for living around your retirement fund, though it is important to save for retirement because nothing is guaranteed for us. Our parents have Social Security, but will we? I’m not willing to risk having freedom later on in life. If that means making a few sacrifices now, so be it.

Saving something is better than saving nothing and investing in your 20s isn’t boring or cautious – it’s smart. If you can’t afford to max out your IRA or 401(k), there’s still sense in saving a little each month. That’s the approach I’ve been taking. It will all add up eventually!

Beyond that, I think most of you know how powerful compound interest is, and the earlier you start saving, the stronger it becomes.

Third point: People who are saving in their 20s are people who don’t set their sights high. They’ve already dropped out of the game and settled for the minor leagues…$200 a month isn’t going to make the dent that a $60,000 pay raise will after spending all those nights out networking.

What?! Those saving a lot in their 20s could very well be setting their sights on early retirement, which doesn’t sound like the minor leagues to me. They could also be saving up for a mini-retirement because they want to travel the world for a bit.

I sound like a broken record, but saving money gives you options as long as you’re saving for a purpose and using your money for that purpose. I’ve been guilty of saving out of fear, and no, it’s not rewarding.

To the last bit – yes, networking is important, but it doesn’t have to be expensive. I understand the author lives in NYC, but there are other ways to network with influential people than going out and drinking at fancy bars.

Even then, what happened to making your own way? If living life on the edge means answering to someone else about your vacation time then your raise doesn’t sound too appealing to me. I know being self-employed isn’t for everyone, but there are a number of ways to earn more money that don’t involve spending a ton.

Deprivation is Missing the Point

Last few points: Life is to be lived, not watched from the inside of your rent-controlled apartment…When you die, you can’t take your money with you…It’s good to be cautious and plan for unexpected events. It’s also good, however, to learn how to release and destress. Everything works out, and if you’re smart, able and had a job once, you’ll have one again.

I completely agree with the first two points. Deprivation isn’t fun, period. But saving does not equal deprivation. Neither does being frugal. Frugal Rules’ tagline is Freedom Through Frugality; That’s because living within your means brings you happiness and is intrinsically freeing. Debt is the exact opposite.

The problem most people have is that they’re unaware of their spending habits. This creates chaos that becomes too overwhelming to deal with, so they resign themselves to living paycheck to paycheck in the name of having more fun.

You don’t have to completely limit yourself to save! If you can master the basics of money management and spend less than you earn, you can still live an amazing life. You need to live and spend according to your values, and stop worrying about everything else (like keeping up with the Joneses). That is freeing.

Lastly, I appreciate the author’s optimistic attitude toward replacing income, but this isn’t the case for everyone. You can be an amazing employee and (sadly) have horrible interview skills. Or your industry could be saturated. Jobs aren’t guaranteed. It’s easy to be positive when you’re employed, but I’ve seen too many people struggle to land a job to agree with this.

Hopefully you realize you can save for the future, for things that matter now, and still have fun. It’s all about prioritizing what’s important to you and saying “No” to the rest. You have to create a life that’s worth living to you.

For many, going out drinking to “network” every night doesn’t sound fulfilling. To others, it sounds like a blast. “Living on the edge” has a different meaning depending on who you ask. Define it for yourself and go after it. You shouldn’t be living a life that doesn’t excite you. Just use your money wisely as a tool to get there.

What was your reaction to the article? Do you agree with the author? Do you think people can balance saving for the future and living in the present? Does saving equal deprivation, or freedom?