How to Balance Minimalism With Wanting More

Balancing minimalism with wanting more can be a challenge. I share how I’ve come to balance the two and still be able to work towards long-term goals. 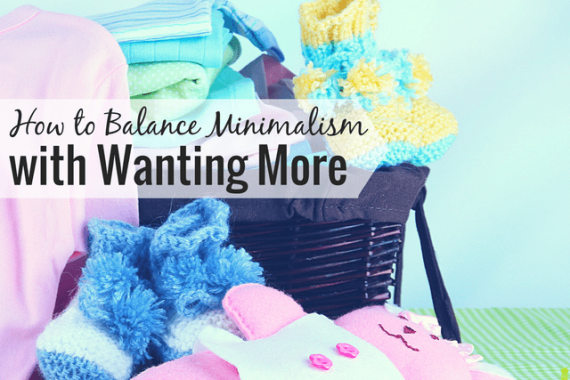 Home » Save Money » How to Balance Minimalism With Wanting More

We were having dinner with some good friends recently, and the topic of minimalism came up over the course of the evening. They know I’ve left my former packrat ways in favor of a more simplistic, minimalistic life and had some questions as to how that was going and how we’re seeking balance.

Balance, especially when you’ve been on an extreme, can be a challenge to attain. You, or at least I, want to swing instantly to the other extreme and, as a result, overcorrect and end up in a situation you don’t want to be in. Such can be the case of a spender and packrat turning towards minimalism.

The newfound excitement of being free of a bunch of junk can lead you to think having a lot less is better and bringing something into your house is against some sort of creed, and you need to feel shame. Of course, that’s not the case though it doesn’t mean it’s easy to find balance between the two. Here’s what has stuck out in my mind as we seek to embrace minimalism.

It’s Not Bad to Want Something

It’s easy to pick this idea up in the personal finance space, especially from those with a frugal or minimalist bent. It’s easy to see spending on something that’s apparently frivolous as bad and saving it or getting rid of something is good. It is understandable why this is a prevailing ideal as you don’t want to spend foolishly.

Advertisers try to do anything they can to separate us from our money. They appeal to our felt need to have the latest and greatest or the sense to belong and get us to spend our hard earned money to achieve it. Taken to the extreme that behavior can lead to debt, less money to save or being overwhelmed by junk.

As someone who wants to live more simply, it’s easy to see why you want to avoid such circumstances. However, that doesn’t mean it’s bad to want something. That something is relative to your situation and means, but as long as it’s not leading you into debt, it’s not bad – especially if it brings you enjoyment. Of course, it’s not bad to want something and I have learned to accept that as we seek a life on our terms.

Don’t Be the Joneses

We hear all the time about the Joneses. They’re the first to have the latest toy and they drive the high-priced cars, but in reality, they’re poor because they spend all their money on things.

Just as we see the Joneses on the free spending end of the extreme, we also see them on the minimalistic side. We see it in the popularity of the tiny house movement. TV shows make living in a 300 square foot house seem so luxuriously simple that it’s bound to be something more people should pursue.

What’s often left out is that tiny house living isn’t terribly practical for many and brings with its own set of unique risks. This doesn’t mean we should shun it altogether, but tiny house living should be done mindfully – as with anything else important in life. It’s important to go after something you want because it makes sense for your life, not because it’s what “everyone else” is doing.

It Comes Down to Knowing What You Want in Life

As with many other financial issues, minimalism and finding balance comes down to knowing what you want in life. We talk a lot here about taking a long-term view of your life and finances. That’s incredibly important, from saving for retirement to paying off debt, you want to know where you’ll be 10, 20 and 30 years from now.

However, it’s also important to know what kind of life you want in the present. You need to have some sort of outlet, or activity you get enjoyment from now. Otherwise, life can get boring awfully quickly. That’s really the crux of the issue in my opinion – knowing how to achieve the kind of life you want now, without sacrificing your future.

For the minimalist, this may mean coming to the understanding that it’s ok to bring things into their house they enjoy knowing it’s not going to lead to becoming a hoarder.  For the packrat, this may mean determining what, if any, value items in their home add to their long-term future. It may not be the easiest exercise, but I find it makes it simpler to find a balance between minimalism and wanting more.

How do you balance minimalism and wanting more? Who are the Joneses you try to keep up with? How do you determine if it’s okay to spend on something if you question the long-term value?