Posted on July 27, 2015 by John Schmoll in Self Employment 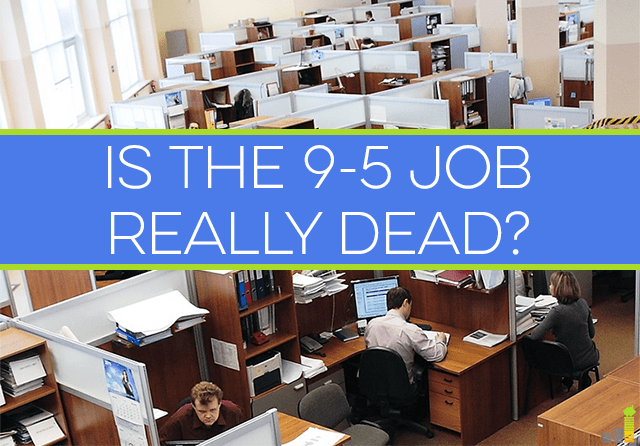 Last month an article made its way around the interwebs purporting that the 9-5 job might be dying. Running a business myself, the article instantly caught my attention. While it has been a little over three years since I quit my job to run our business, I readily admit that it’s not for everyone.

However, numbers point to a changing landscape that is having an impact on the traditional 9-5 job. Such as:

I don’t know that these numbers necessarily mean that the 9-5 job is dead, though I do believe it’s showing signs of old age.

The numbers above do point to change. There is no doubt about that. More companies are embracing the idea of freelancers or hiring contract workers. We’ve seen it in our own line of business. What was unheard of 5-10 years ago is now being embraced. It used to be a rarity to bring in a freelancer and now it’s seen as a good thing to help manage workflow.

That being said, I don’t believe that means the traditional 9-5 job is truly dead or necessarily dying. Fortune reports the companies making up the Fortune 500 are employing more people than ever – at 27 million total which is up 3 million from 2014. That’s just the top 500 most profitable companies in the U.S. and not other large companies. Simply put, many people are still employed in a traditional 9-5 job although the landscape is changing.

…But it Isn’t Healthy

No longer are we staying in jobs for 30+ years and setting off into the sunset with a gold watch at our retirement party. I’ve spoken at length with family members about this topic leading them to say that employers don’t care about their employees anymore.

We’ve all seen it. It was a rite of passage for many firms during the Great Recession. The headlines were full of companies laying off tens of thousands of people. The reasons behind each situation may have been different but at the end of the day they were shedding employees.

I believe this helped accelerate the shift we’re seeing. People began to see that they could not depend on their employer for everything and instead had to look outside the traditional mindset to think of new ways to earn income.

The increased number of contract workers I mentioned above is a clear sign that the traditional 9-5 job is not in the healthiest predicament today. Years ago, many employers would blindly just put up a new posting when a job came open. Today, more (at least in my experience) are looking to fill their production needs with freelancers or contract workers. This usually happens for two reasons:

We Have More Responsibility

What does all of this mean with relation to our careers? Should we all cast aside the traditional 9-5 job and become freelancers or start our own businesses? I don’t believe so. It would be shortsighted to say that. But, I believe it behooves us to take more responsibility over our careers and livelihoods. No one else is going care about it as much as we do.

This can mean a variety of things, but ultimately I believe it means we need to look outside our comfortable boxes and find opportunity. That might mean changing jobs. It might mean starting a side hustle or two in order to make extra money and see where it takes you.

It might mean simply staying with your current employer but pushing to get that promotion you’ve been wanting in order to make the salary you want. Only you can know what it means for you, but it also requires thinking outside your comfort zone to get to where you want. 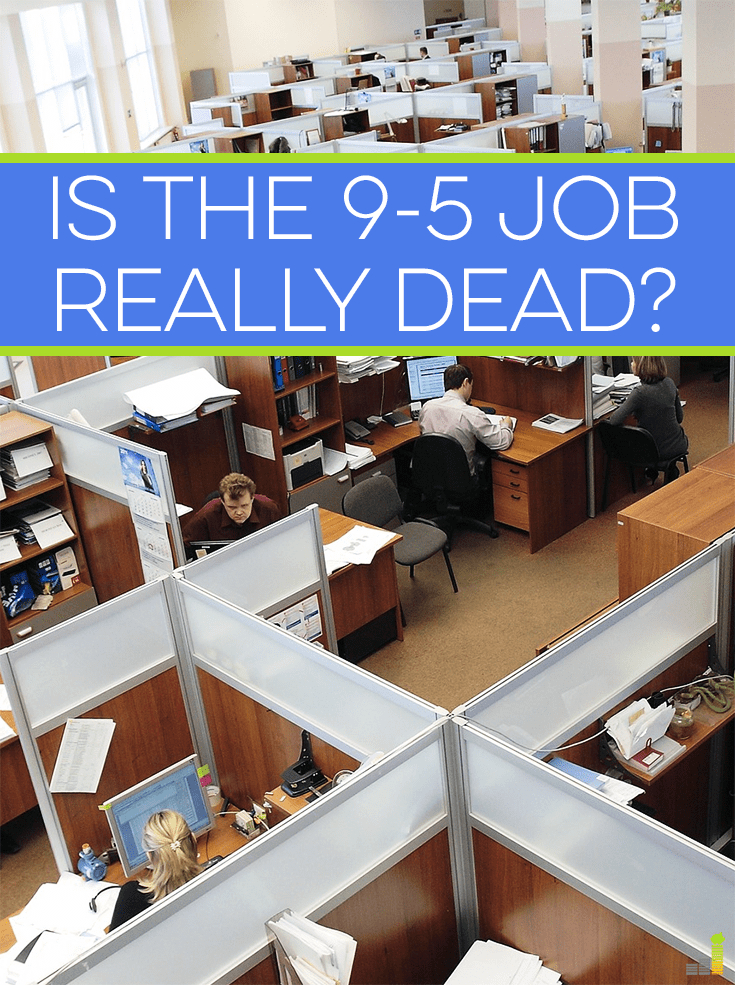 Flexibility and Value Are Today’s Currency

Regardless of your take on whether or not the 9-5 job is dead or dying, today’s culture requires flexibility and the ability to offer value. Things can, and do, happen rather quickly in many cases leaving you behind if you’re not flexible. That requires acting quickly when opportunity presents itself.

Whether you’re a traditional office worker or an entrepreneur, you must provide value. That value is a big piece of what sets you apart and will be what brings success in your career.

Think of this flexibility (really agility) and value as your currency. It’s something only you have and when you exercise it wisely it’ll get you to where you want. That’s the key really, regardless of your professional situation, to create the kind of professional life you want.

I don’t know if I’d say the 9-5 job is dead, but it’s definitely changing. Many of those changes are for the good in my opinion, though not all might be. As someone who has benefitted greatly from the changing culture, it excites me to see where culture is going on a professional level. But, it also reminds me that change is constant and those who seek to grow with it get to where they want.

Do you think the traditional 9-5 job is dead? What do you believe is the currency in today’s professional climate? If you work for yourself, why do you think the entrepreneurial culture is glamorized the way it is?