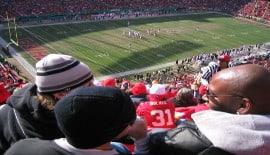 Whether they’re watching it for the game, the half time show, or the commercials, you’d be hard pressed to find anyone who at some level does not like to watch the Super Bowl. Even if they don’t, who would not like to go to a Super Bowl party?

Super bowl parties are usually rife with nice and greasy junk food, football gear, fun and friends. I know, not the best combination to strive for, but hey, life is meant to be fun at times too. The great thing about some of these Super Bowl party ideas, is that they work for party ideas in general, as some are food-related (MMM…food!) and some of the games could possibly be applied to other sporting events.

Pizza Can Go With All of Your Super Bowl Party Ideas

I don’t know how much is spent on pizza during the Super Bowl, but it’s bound to be a lot. We love pizza, and it often seems to go hand in hand with watching football on a big-screen TV so why not have it while watching the Super Bowl. You can always order pizza in and split the cost amongst your friends (if you do, make sure to allow PLENTY of time to have it delivered), but there are other options available if you want to go another route.

One of my favorite Super Bowl party ideas that I have seen is to make your own pizza party. The host can provide the dough, sauce and cheese and everyone else attending can bring their own toppings. This can help bring down the cost, plus you might get to enjoy something new. As we’re deep dish pizza fans, we’ve used the Chicago Metallic Non Stick Pizza Pan for years and love it for making a good deep dish pizza. Towards that end, check out my favorite healthy pizza recipe if you’re looking to save a few calories on your indulgence. 🙂

Who does not enjoy watching Super Bowl commercials? It seems as many people watch for the Super Bowl commercials as they do the actual game itself. True, not all of them are good, and some are just an absolute waste of money. However, there are some that stick out as memorable and are great from an advertiser’s perspective.

If you’re looking for Super Bowl party ideas that keep the non-football fan entertained, you can have friends rate the commercials to see what everyone likes the best. This can be done either informally, or have them write down their favorite ones and vote on it at the end of the night. This is fun, free and can involve even those who could care less about the game and are only watching so they can see the Super Bowl commercials.

Ok, this might not be the most frugal of Super Bowl party ideas, but it’s fun nonetheless. Your part in this fun game is to write down all of the key players’ names and put them in a hat. Each person who is at the Super Bowl party will put in a certain dollar amount into the pot. It can be as much or as little as you want, the point really is not the amount of money, but it’s making the Super Bowl a little more engaging while also adding a little competition into it.

Each person who puts into the pot will draw one of those names and at the end of the Super Bowl, the winner who drew the winning MVP will get the pot. I’ve played this at a number of Super Bowl parties and it’s cash that can go straight in to your savings account at the end of the night.

Similar to the “pick a player” game, “pass the cup” is not the most frugal of Super Bowl party ideas, but is still fun and can still be done on the cheap.

How this game works is that you start with an empty cup and the first person will put a dollar in it. Again, the amount you choose to work with is insignificant. That person has to name some sort of football play, like safety, for example. The cup gets passed around with each person putting in the said amount until a safety occurs. The person who is holding the cup when the safety occurs wins the money in the cup and they then name another play and the game starts over again.

I know, I am a PF blogger and this is a post about spending money and eating junk food! It’s all in moderation, right?! Who has gone to a super Bowl party and NOT had food? If you have, then I guess I need to be looking for other Super Bowl party ideas.

One thing to keep in mind for a Super Bowl potluck is that a Super Bowl party is all about finger foods. You don’t want to bring something extravagant and not have it be eaten. The great thing about a potluck is that you can divide up the food in order to keep cost per person down and each person can bring a specific finger food. This will bring variety and a little fun to the event as you can try numerous finger foods and possibly get good finger food ideas for your next party. My go-to for getting something for a potluck is usually Target or, if I have more time, is Amazon as they’re both usually good for pricing.

What are some of your favorite Super Bowl party ideas? Do you watch the Super Bowl for the game itself, or solely for the commercials? Who’re you wanting to make it there this year?