March Madness starts next week! Can you enjoy watching March Madness while at work? I think there are many ways you can enjoy it and have fun as well. 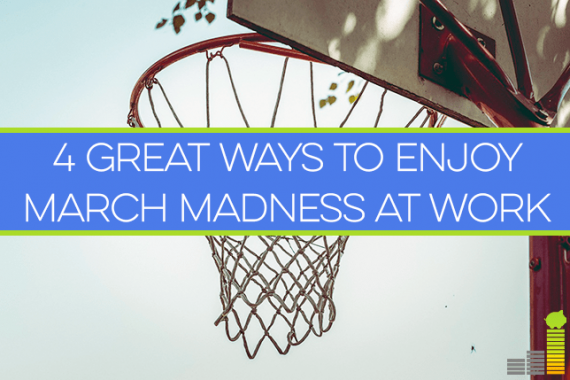 One of my favorite times of year is March Madness. I guess since I work from home now I can, theoretically speaking, watch games during March Madness but then I wouldn’t get any work done. I do miss working in an office setting where I could partake in the camaraderie of March Madness tournaments at work.

While I do love football at pretty much any level, following March Madness come in a close second to my fondness for all things football.

To give you a little background, I grew up in ACC country where college basketball was everywhere and most teams were either good or average at worst. The NCAA Tournament games begin on a Tuesday (this Tuesday to be exact) and start out with games going late into the night and end up with One Shining Moment on a Monday evening early in April. Add to that the growth of some Cinderella teams the last few years and it can be easy to get caught up in the hoopla.

However, watching March Madness at work can be a major headache for employers as people call in sick or watch the games on their computer which impacts productivity. I think it’s the smart employers though that see this and try to use it to help improve employee morale while at the same time allowing employees to enjoy something they might like.

With that in mind, I’ve come up with some ways to watch March Madness at work and still get your work done.

March Madness is About Following the Games

Many companies hate March Madness time as it never fails that employees are trying to watch the games on their computers while working or constantly checking their phones for the scores. I understand the frustration on many employers’ parts.

***Related: Want to catch the action at home, but don’t have cable? Here’s how to stream March Madness without cable and save buckets of cash***

While it may mean you do not get to watch the game as a whole it, it does allow you to follow it casually while at the same time not slowing down the computer network. If you work somewhere that does not do that, simply ask if it’s an option. Don’t be the bad guy though and call in “sick” because you don’t want to miss the game, many employers are just too smart for that.

If you can watch games while at work, Hulu with Live TV can be accessed via desktop, or your smartphone. Try it today to see if it does the trick for you. It’s the only service that will let you see all the games.

Fill Out Some Brackets

Half of the fun of March Madness is filling out a bracket. Whether you research it and have certain teams you think will make it to the Final Four, or simply guess it can be fun for many. This can be done in simple paper fashion, or you can use of a number of websites that offer doing this for free like Yahoo.

Yahoo allows you set up teams of people that you can compete with or just enter a competition on your own against others with no money on the line. I have also seen this taken one step further by having teams of people go against each other with the winning team getting something like a free lunch at the end of March Madness or by giving them a free hour of vacation for each individual on the team.

I will give a disclaimer though that I am not necessarily endorsing gambling on March Madness, nor betting on sports. The numbers, from 2016, show that over $9 billion was wagered on the NCAA tournament, according to MarketWatch, and only $100 million of that was done through legal means. That is just a crazy stupid number.

What sporting event does not go with a potluck? This still holds true with watching March Madness at work. Just because it’s a potluck does not mean that is has to be junk food, as you’re likely sitting at a desk.

***Related: Do you love NFL football, but want to cut the cord? Here’s how to watch NFL games without cable and still catch all the action!***

I have seen veggie trays as well as fruit trays hold their own as desirable finger foods at times like this because they can be consumed quickly. I’ve also seen creative snack ideas revolving around teams in the NCAA tournament that always go over well.

A crock pot is a great investment for times like March Madness because you can take your snacks to work and keep them warm. Better yet, you can also use it at home for evening games.

The point is to have fun with it and be a little creative so you can still partake in the fun and maybe even watch a little of March Madness at work.

This final one is a bit like the filling out the brackets section. It gives you a little skin in the game without gambling on March Madness. How this works is that you have each interested employee choose a team, from a hat, that they’ll support and they all put in a certain dollar amount. It can be up to you, but I have seen anywhere from $1-$5 per person.

The person who picked the winner will get to win the pot at the end of the NCAA tournament. This allows for some fun, while also some competition to see who might end up with the loot.

Just make sure that your employer is fine with such an arrangement before pursuing this option, if they are it can be a nice little addition to your online saving account (we recommend Barclays as they pay 2.20 percent and require no minimum balance) by winning your March Madness pool at work.

Will you be following the NCAA tournament this year, and if so who will you be pulling for? What does your employer do to allow you to watch March Madness at work?