Posted on September 11, 2012 by John Schmoll in Budgeting, Frugal Living 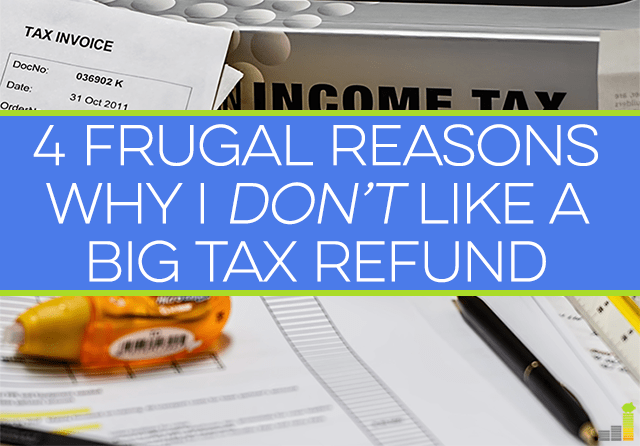 Ask almost anyone and they’d say that they would love to get a cash windfall. I mean, who doesn’t like getting an unexpected check of $3,000 or even more. The frugal freak in me is already thinking of the ways that I could maximize such a find. Unfortunately, there’s a catch to big refunds; you could’ve been using that money throughout the year and the money was already yours anyway. This find comes in the form of a big tax refund. Living frugally calls us to make wise and prudent decisions with our money that best set us up for success.

A Tax Refund is an Interest Free Loan

That nice “bonus” you get during the Spring is actually the return of an interest free loan given to the government. You see, they take the money out of your paycheck and “hold” it (i.e. spend it themselves) for you. Some 75% of us are unwittingly giving the government interest free loans each year. Even in today’s abysmally low interest rate climate you would make something on the money in a savings account. The frugal person in me sees this and knows that there are much better ways to use this money throughout the year and look for ways to do just that.

The main culprit of receiving such a large tax refund is found on the W-4 you fill out through your employer. If you’re receiving a big tax refund then you’re having too much withheld throughout the year and giving it to the government. The easiest way to change this situation is to ask your employer to allow you to fill out a new W-4, and increase your allowances. Once filed, most employers are able to get it implemented within a month and will result in you taking home more money per paycheck.

The average tax refund is just over $2,900 per taxpayer. A major problem with getting such a large tax refund is that it is easily spent on often frivilous items. I know many people, myself included in the past, dream of the many ways they can use the money before they get it. Maybe a new big screen TV, or a down payment on a car, or home repairs. Some of those things might be ok, but many can end up being an unwise use of funds. Now, if you had received this money in smaller chunks throughout the year, you might have made more frugal decisions or simply just saved the money.  In light of this, your goal should be to get your refund, or payment for that matter, to be as close to $0 as possible. That means that no one owes anything to the other party and you can be happy having that extra money in your pocket each month.

Broken down, a refund of $3,000 comes out to an extra $250 per month that could be put into your budget. There are more than a few ways to use this extra money, such as:

Those are just a few ideas to get you started. The point is that it’s your money and it benefits you to put the money to use each month as opposed to waiting until the end of the year to get it back from the government in the form of a big tax refund.

Living frugally calls us to look for the wisest way to spend our money. While the idea of a large tax refund might make you think that you’re forcing yourself to save, you’re really just giving up the use of your own money for a year. I know that I’d rather use it myself and not loan it to the government.

With that said, what would you do with an extra $250 per month?